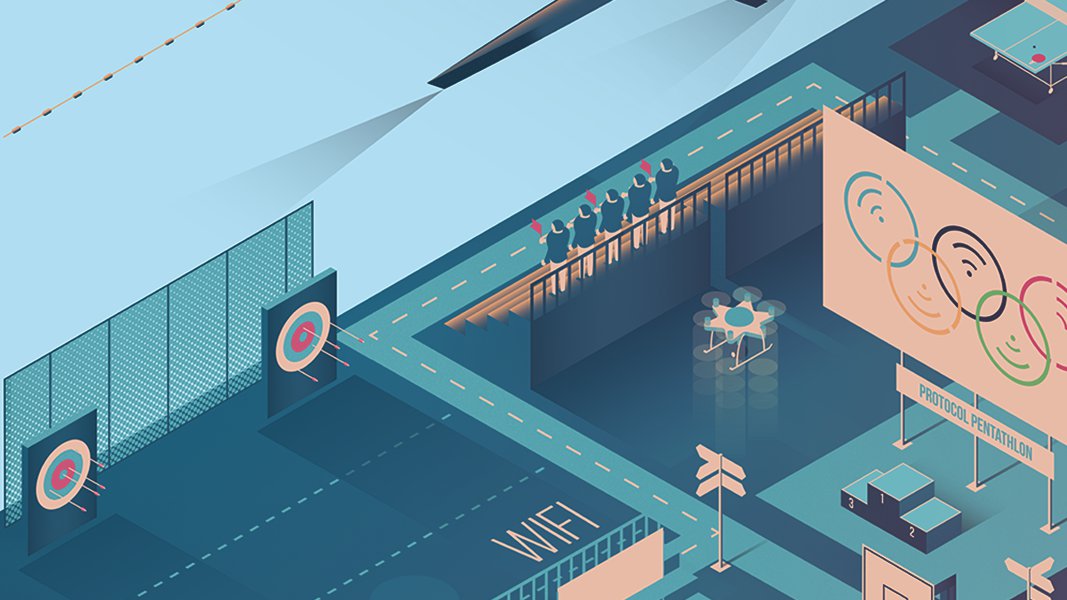 As promised, with this episode we’ll start reviewing each of the leading connectivity solutions one by one, sharing the lessons we’ve learned while exploring their capabilities and limitations. And what else could we start with but Wi-Fi, arguably the most globally recognized wireless networking technology. According to the Wi-Fi Alliance, the standard carries roughly a half of all Internet traffic for billions of users worldwide. It’s most commonly used to provide computers, smartphones and tablets with a quick a reliable Internet access, but it can theoretically connect any two devices to enable the exchange of data between them. Widely used in private homes, offices and public spaces around the entire globe, Wi-Fi might seem to be perfectly positioned to take the early IoT market by storm. And while the dust is far from settling in the IoT communication standards war, this powerful technology is clearly nowhere near the top of the list of today’s hottest connectivity solutions for the Internet of Things. So what went wrong? Let us break it down for you.

The Wi-Fi technology is based on the family of wireless networking standards IEEE 802.11x. They define only the first two layers of the OSI reference model – the physical layer and the data link layer (a quick introduction to the 7 layers of the OSI model can be found in our previous blogpost). As far as the network and transport layers are concerned, Wi-Fi typically relies on other standard protocols, such as UDP or TCP (for transport) and IPv4 or IPv6 (for networking). Let’s see what this arrangement looks like on a simplified version of the OSI model:

Note the empty space at the application layer, as we’ll get back to it later.

Wi-Fi is a powerful and reliable wireless connectivity solution that the technology industry has successfully relied on over many years. 802.11 has emerged as a global communication standard because it offered numerous excellent features, and was continually developed and improved by the Institute of Electrical and Electronics Engineers (IEEE). As a result of these efforts, multiple “flavors” of 802.11 were developed over time, with 802.11n being the most commonly used in today’s homes and offices. A Wi-Fi network has a star topology, which means that all its nodes connect directly to the central hub, e.g. a wireless router. With this arrangement, devices can be added and removed from the network without disrupting its entire structure and flow of data. Designed for the rapid exchange of high data volumes over reasonable distances, Wi-Fi does that job just perfectly. Basic parameters, such as range or data transfer rate, vary between different 802.11 standards, but a typical wireless router is usually enough to provide a decent network coverage for a standard apartment. In larger buildings, more access points or signal extenders can be deployed to increase coverage. As for the throughput, some versions of the 802.11 standard have the limit of 11 or 54 Mb/s, but the commonly used 802.11n is capable of transmitting hundreds of megabit per second, and 802.11ac is even faster. These numbers certainly look impressive, as the throughput of other wireless connectivity solutions for the IoT is expressed in kb/s rather than Mb/s. On top of that, one of Wi-Fi’s major strengths is the ubiquity of 802.11 infrastructure across the globe. The fact that it is commonly integrated into new laptops, smartphones and tablets is also extremely relevant from the perspective of IoT applications.

The features mentioned above is what made Wi-Fi the default technology for enabling wireless Internet access in our lives. It can easily transport high-definition video streams and its throughput limits are usually way higher than the needs of an average user. But the IoT is a completely different thing that the good ol’ Internet. Wi-Fi’s impressive data transfer rate is overkill for typical smart home/office applications, where instead of data-heavy content, devices broadcast simple commands (e.g. on/off), state-change signals or only tiny bits of information (e.g. sensor data). And while such overcapacity is not a big problem by itself, there is a cost for this enormous throughput. Being a high-bandwidth communication standard, Wi-Fi is also extremely power-intensive. This is a big problem in the resource-challenged IoT world, where multiple devices are supposed to operate without any wires. In the case of several other connectivity solutions, coin batteries can keep simple wireless devices running for years. But building a battery-powered Wi-Fi device that could last even one year with decent responsiveness is virtually impossible. The power-hungriness is obviously not a big deal if a particular device is connected to a power lead or wall outlet, but for all those applications where battery-powered operation is a must (e.g. sensors in remote places), Wi-Fi is just not capable of delivering a reasonable performance.

Further limitations arise from the topology of a Wi-Fi network. Reliance upon a central gateway to handle all the traffic has one major drawback – once a hub fails, individual nodes of the network cannot communicate with each other, essentially making the entire network inoperable. Of course you don’t expect your hub to go down all that often, but each such incident could end up being extremely irritating if all your light bulbs, door locks and garage doors belong to a single smart network.

As already mentioned, Wi-Fi can be found in every new smartphone or laptop on the market. Out of all the communication protocols aspiring to connect the IoT, only Wi-Fi and Bluetooth have this advantage of being natively integrated into our phones, making them ultimate controllers for our smart environments. However, in the case of Wi-Fi this potential cannot be fully realized. Even though a smartphone and a Wi-Fi device use the same language to communicate, this communication is not direct as it always goes through the network’s central access point. This is why Wi-Fi devices cannot use proximity sensing features that have become a trademark of the Bluetooth technology.

Given that virtually every potential customer has a Wi-Fi enabled phone, one could assume that setting up a Wi-Fi network of smart devices would be a piece of cake. It is a bit complicated, though. Before a smart device can be added to a Wi-Fi network, it has to know the password for this network. This is easy when you want to connect a laptop or a smartphone, but gets tricky when your device has no keyboard and no screen. It might seem that a smartphone could do the job, after all it also speaks Wi-Fi so why not use it to tell the device what the password is? This certainly can be done – but first the device has to be networked with the phone, which brings us back to where we started from. Manufacturers use various methods to make this setup process as easy and intuitive as possible, yet each of them introduces additional complexity and has certain drawbacks. The setup process is one of the biggest problems of the Wi-Fi technology in smart home environment where a flawless user experience is top priority. To address this challenge, some of the vendors have gone so far as to add microUSB ports to their smart devices solely for configuration purposes. While this effectively solves the setup issues, we are not convinced that light switches with USB ports is where we want to get with the IoT.

In the first episode of our series, we kept emphasizing that interoperability tops the list of challenges which need to be addressed for the IoT to realize its full potential. So what Wi-Fi offers in this regard? Not that much, unfortunately. As we already mentioned, Wi-Fi does not define the application layer, which means that machine-to-machine communication is basically impossible unless companies manufacturing two particular devices work in close cooperation to precisely define how they can communicate. Wi-Fi is often mistakenly considered interoperable, since we use it all the time to successfully enter into all kinds of interactions with each other. But all these interactions can happen only because there are humans on both ends of the communication process. Setting up a Skype conversation is what can be described as adding an ad-hoc application layer to the Wi-Fi based communication. Humans can do it by choosing the right tools and coordinating the entire process by themselves. “Things” can’t handle that, and for this reason Wi-Fi is a standard which by itself does not ensure any interoperability in the world of connected devices.

Finally, there is the price factor that always needs to be taken into consideration by manufacturers. Wi-Fi modules are relatively pricey, and although differences have decreased recently, they still remain between 50% to 100% more expensive than some of the competing radio modules used in connected devices. This is not something that can be easily ignored when drawing up mass production plans.

Now it must be emphasized that some of the disadvantages mentioned above apply to the vast majority of the leading communication technologies, just to mention the hub-based topology or the complicated setup process. But what really disqualifies Wi-Fi as the ultimate connectivity solution for the IoT is its power-hungriness. Despite numerous impressive features, it just cannot efficiently support wireless devices, such as sensors or controllers, which are an important part of what the IoT is expected to become.

There are certain scenarios where Wi-Fi can still get the job done really well. If you are a manufacturer of a device which needs a reliable connection with the cloud rather than with a dense network of other smart devices, and your product needs to be connected to a power lead or wall outlet anyway, and you manage to find a way to overcome setup challenges to make this process intuitive and user-friendly, and you don’t care all that much about the price of a radio module, then Wi-Fi becomes a totally reasonable solution for you. Otherwise, you should think twice. Wi-Fi is an excellent technology for performing data-heavy activities, such as streaming video content, and it is likely to cover this small fraction of the IoT space where such processes are required. But when it comes to smartening our homes and offices, there are simply more suitable solutions out there, the ones that were designed specifically to address the needs of the IoT. Next time we’ll take a look at one of them, so stay tuned.